Every year on July 1st, Canada’s birthday is celebrated across the country. Canada will be 143 years old on Thursday so make sure you get out and celebrate with us!

The Town of Canmore organizes the Canmore Canada Day Parade. The parade starts at Main St. (8th street) and Railway Avenue at NOON.

To download full details on the Canada Day celebrations in Canmore, click on the image below for the downloadable PDF version: VOLUNTEERS NEEDED FOR CANADA DAY:
The Canmore Canada Day Committee is in need of help – They need people to help out with set up and tear down at Centennial Park.
– Wed, June 30 at 10am – 4 people required to pick up equipment from the Canada Day Storage and transport to Centennial Park.
– Wed, June 30,  Noon to 4 – 10 people to do set up
– Thursday, July 1 at 5:30 – 12 people required for tear down and four to take equipment back to storage.

If you or anyone you know is able to help, please contact Chris Bartolomie (Town of Canmore, Supervisor, Arts & Culture and Canmore Canada Day Committee Town Liaison) at [email protected]

Check out what they have going this year: Canada Day in Banff

Book by August 31, 2010 to take advantage of this special offer!

Download the packages below or visit Rocky Mountain Holidays.

One-Way Tour Holiday Packages (Can be taken in either direction):

Trans-Canada Rail Tour Holiday Packages (Can be taken in either direction):

Rail and Self-Drive Holiday Packages (Can be taken in either direction):

City Stop Add-Ons (To be added to any of our packages or purchased separately):

Describing river surfing to a landlocked Albertan is a difficult task.

Traditionally, surfing has been an activity reserved for regions nestled by the ocean. However, with the new sport of river surfing gaining popularity, it is becoming a common sight to see surfers riding on the Kananaskis river.

Alberta River Surfing Association co-founder Neil Egsgard says, “When people think of river surfing they picture someone standing on a surfboard holding a rope or someone actually riding down the river. This is not the case. You are actually surfing. You just need fast moving water and an obstacle and then gravity and the river work against each other and you can ride the stationary wave.”

Egsgard’s journey into river surfing began when he saw a man surfing under the 10th Street bridge in downtown Calgary. Egsgard talked to the surfer and went out to the Kananaskis river that weekend and tried it. After organizing a small crew of devoted surfers, Egsgard and friends decided over a few pints of beer to start the Alberta River Surfing Association to help spread the word and develop the sport in Alberta.

Egsgard tries to head out surfing every weekend as he has developed a love for the sport.  “It’s the flow, the connection to the moment,” he said. “When you’re surfing, you can’t think of anything else. It is just you and the world.

“You are not attached to anything, but you are just perfectly in tune. When you surf well there is this thing called flow, everything is transcended, you’re on the edge of your ability. Your mind turns into action. You’re not thinking, you’re doing.”

The Alberta River Surfing Association has been successful at helping fellow Albertans enjoy surfing without leaving the province.

Jacob Quinlan took up surfing while backpacking for eight months in Australia. When he came home to attend the University of Lethbridge he started a surf club and brought fellow students down to California for annual surf trips. It was a member of his surf club that introduced him to the idea of river surfing, which Quinlan admits sounded like a silly idea at first.

“I thought it was dumb at first. I got to Kan and my first ride was awesome,” he said. “It is similar to ocean surfing because of the feeling and the stoke and the guys; that culture carries on. The mechanics are way different, an ocean wave is giving you this steep ramp and gravity pulls you down. A river surfing wave ramps in a completely different way.”

Quinlan says that when he started there were only a few guys surfing in Alberta, but now when summer rolls around, there are a lot of people coming out to try the sport.

“The guys that go out know it’s cold and they know it’s a shitty wave,” said Quinlan. “The people that are gonna pick it up and love it are going to do it for the right reasons.”

Surfing in the Kananaskis can be done year-round. Water temperatures remain relatively constant, therefore, a good wetsuit, boots and gloves are needed all year to ensure comfort in the water.

Egsgard says he has comfortably surfed the Kan when air temperatures have been as low as -25 C. In addition, sport is also ecologically sustainable. According to the Lower Kananaskis River Users Association, “Due to the river shutting off at night and environmental assessments, the lower Kananaskis River was built into a kayak course. Over the years, the features have been regularly adjusted and changed to create unique and well-used whitewater.”

Egsgard feels river surfing is a safe and eco-friendly sport.

“There is almost zero environmental impact,” he said. “When we build waves we use environmentally safe materials that cannot break down.

“We want to share the current ramp we are building. River waves should be like skateparks, they are way cheaper and safer. And the cost is so minimal. There is no reason why every fast moving river shouldn’t have a surf area.” 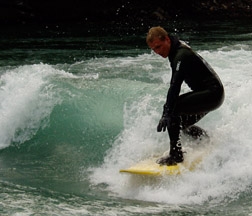 Calgary store Undercurrents is offering river surfing lessons starting in June and have gear available for rent. For more information check out www.undercurrents.ca