ROCKY MOUNTAINEER TO DEBUT NEW ROUTE FROM THE US IN 2013

“We are very excited to offer a new route from Seattle, WA, giving travellers who fly into the region or cruise to Alaska from the port even more options and convenience to experience Western Canada by rail,” says Dan Joyce, Executive Director, Strategic Development of Rocky Mountaineer. “Coastal Passage will be a great addition to the exclusive routes we currently offer and a unique opportunity to experience two amazing countries, rich in history and natural wonders. We look forward to welcoming guests onboard in 2013.

Guests on the Coastal Passage route will traverse the natural beauty of the Pacific Northwest, the renowned scenery of British Columbia and the majestic mountains of the Canadian Rockies from the comfort of Rocky Mountaineer’s award-winning GoldLeaf Service. Onboard, they will enjoy luxurious surroundings in a bi-level custom-designed dome coach with panoramic views, gourmet cuisine in a private dining room and personalized service by Rocky Mountaineer Hosts.

Coastal Passage will be available August 24 and 25, 2013, both northbound and southbound, with packages allowing for stays in Seattle, Vancouver, and the resort towns of Banff or Jasper, AB.

Contact Rocky Mountain Holidays for more information or to book.

The award winning Rocky Mountaineer train tour across the Canadian Rockies is on most of your bucket lists. If you are flexible on dates and are able to travel later this month or in May 2012, you must check out the following exclusive GoldLeaf offers on select dates from Rocky Mountain Holidays. The savings are significant. 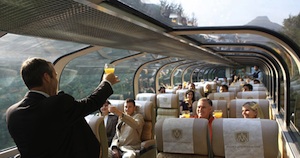 For your convenience, I have posted the eligible dates below. These offers are strictly capacity controlled and so will not be around for long.